A Tale of Two Wine Bars

For wine lovers in Dublin

At just after 8 pm on Thursday last week, the basement of the Ely Wine Bar, just off St Stephen’s Green in Dublin, was as crowded as I have come to expect it during the 16 years it has been under the watchful management of its founders, Erik and Michelle Robson.

The following day Jancis and I took a DART train 15 minutes south of the Irish capital, getting off at the seaside stop of Glasthule to visit 64 Wine of Glenageary. Here its owner, Gerard Maguire, was waiting to give us a tasting of some remarkable wines (leftovers would be made available to his customers, as is his Friday night wont) and some very good food.

These two groups of individuals are accurate barometers of the economic turmoil that has so definitively tamed ‘the Celtic tiger’ since the recession hit in 2008.

In fact, for the Ely Wine Bar, this week marks a milestone as its management lodges a formal – and expensive at over €20,000 – application for a change to its licence allowing it to serve spirits. For Maguire, who spent 15 years as police detective then 15 years as a solicitor, 2016 marks the eighth anniversary of his years as a wine merchant. He bought the freehold of this busy shop and café just as the economy turned sour but intends to see it through for the same number of years as his previous two careers. ‘After this, I intend to open a pancake restaurant’, he quipped.

I doubt that this will happen. Both Maguire and the Robsons are too in love with wine and too attuned to what is going on around them and in particular how nimbly they need to manoeuvre to keep their businesses successful and appealing. 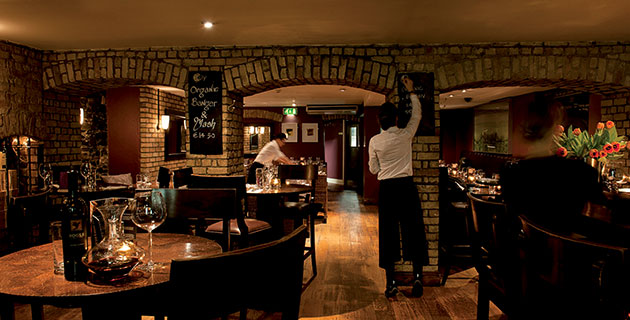 On our table at the Ely Wine Bar was a card that read, ‘Vintages, Verticals and Varietals’ as Robson and his team continue to present their award-winning wine list in a customer-friendly fashion. The menu is as enticing as this, with plenty of produce sourced from Erik’s father’s 400-acre on the Burren, the national park in County Clare, that is wild and magnificent with rare breeds of moths and butterflies, and wet – Erik’s father’s house was flooded last winter for the second time in six years.

But what Erik really wanted to discuss was his licence application. ‘It won’t change the focus of Ely’, he stressed, ‘but it will allow us to make that extra sale of a glass of whiskey or a gin and tonic at the end of the evening. And, more importantly, it will allow us to compete on a level playing field with the rest of the competition. When we opened Ely, we wanted to be the best wine bar in Ireland, something we have achieved consistently, but that is partly because, as I point out to our staff, nobody is opening a wine bar any more. Wine bars today are a vanishing breed. Instead, our competition comes from former pubs that have been taken over during the past couple of years by companies that operate them as pubs, eating houses and cocktail bars, attracted by their cash flow as much as their location and their history.’ 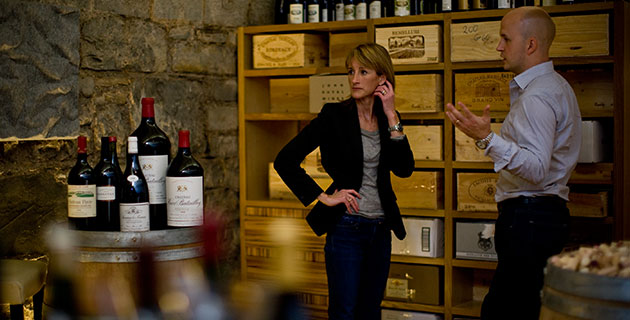 64 Wine, named for its address and also after the Pyrénées-Atlantiques département in south-west France that Maguire and his family used to holiday in, is full of charm. Located on the main street, just a couple of doors from the famous Cavistons Food Emporium, the ground floor still resonates in a very Irish manner with the atmosphere of a village café (see above right).

The ceiling is low. Most of the seats are wooden. A lot of the table tops are made from wine-case ends. There seem to be a lot of local ladies who lunch (not the ultra-posh sort) and their lunch seems to consist of large bowls of the vegetable soup made daily in the kitchen upstairs. The overall quality is high and everybody seems to know one another and to be having a good time. The food is a vast improvement on what was on offer when Maguire bought the place in 2008.

Then there is the wine that lines the shelves down the side of the building with the best being kept in a crammed, keenly-chilled arch at the rear (see below). There are stored the cases of bordeaux; the growing number of bottles of burgundy including, in a discreet corner, what he says is one of the few bottles of DRC imported into the country (Maguire imports a lot directly as well as from 14 importers, including Dr Eilis Cryan of Kinnegar Wines in Galway as the source of his expanding South African range) as well as a fascinating range of Italian wines.

We tasted some of the 13 wines Maguire had lined up. Only six because some we had tasted recently and they were all so good, especially the first wine, the Godello single-vineyard O Soro 2011 from Rafael Palacios in Valdeorras, that was so gorgeous that there was a momentary reluctance to move on. But we did, ending happily with a Vin Jaune 2006 from Domaine Rolet in the Jura. (Jancis will be adding tasting notes on all these wines to the assemblages to be published on this site.)

France is the country that most obviously makes Robson and Maguire’s wine drinking hearts beat faster, although the particular region that does so has changed somewhat since the recession bit. Both cleverly eschewed the policy of seeking out too many inexpensive wines and stuck to their traditional sources, and both have seen a comeback in ordering bordeaux, although not to the same level as before. At 64 Wine, Maguire reported that people still buy bordeaux by the bottle but nobody buys it by the case as they once did.

But the citizens of this fair city are fortunate in having two such enthusiasts for the grape to match all the others we met in Dublin – and subsequently at Ballymaloe House outside Cork – who seem to be so enthusiastic about their food.

About the author: Nicholas Lander writes a weekly restaurant column for the Financial Times Weekend edition

Always be the first to hear about our special offers and events. Sign up to our newsletter and never miss out again!

Sorry, no Tweets were found.